Back to GOD KEEP OUR LAND page 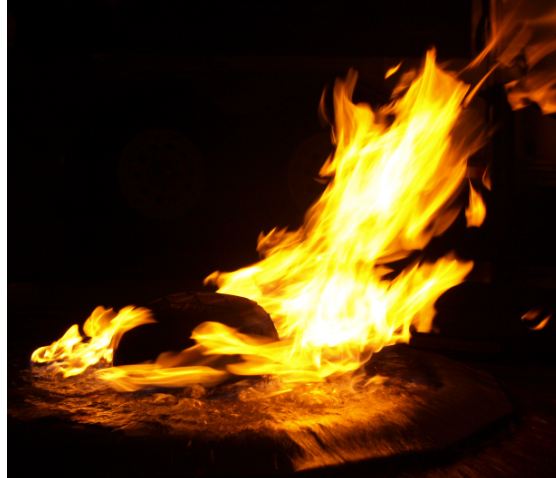 7Of the angels he says,

"He makes his angels winds,
and his ministers a flame of fire."

·     God is looking for EXTRAORDINARY Ministers to light with His FIRE!

·     Are you simply ordinary, or are you extraordinary?

·     Are you boring and mundane, or are you extraordinary?

·     Do you like to do ordinary things that others are doing?

·     Do you want to sleep, or get together with others at church?

1. EXTRAORDINARY Flaming Ministers must be FULL of FAITH and The Holy Spirit!

1Now in these days when the disciples were increasing in number, a complaint by the Hellenists arose against the Hebrews because their widows were being neglected in the daily distribution. 2And the twelve summoned the full number of the disciples and said, "It is not right that we should give up preaching the word of God to serve tables. 3 Therefore, brothers, pick out from among you seven men of good repute, full of the Spirit and of wisdom, whom we will appoint to this duty. 4But we will devote ourselves to prayer and to the ministry of the word." 5And what they said pleased the whole gathering, and they chose Stephen, a man full of faith and of the Holy Spirit, and Philip, and Prochorus, and Nicanor, and Timon, and Parmenas, and Nicolaus, a proselyte of Antioch.

6 These they set before the apostles, and they prayed and laid their hands on them.

7And the word of God continued to increase, and the number of the disciples multiplied greatly in Jerusalem, and a great many of the priests became obedient to the faith.

17Now the Lord is the Spirit, and where the Spirit of the Lord is, there is freedom. 18And we all, with unveiled face, beholding the glory of the Lord, are being transformed into the same image from one degree of glory to another. For this comes from the Lord who is the Spirit.

56And he said, "Behold, I see the heavens opened, and the Son of Man standing at the right hand of God."

21His master said to him, 'Well done, good and faithful servant. You have been faithful over a little; I will set you over much. Enter into the joy of your master.'

5.  EXTRAORDINARY Flaming Ministers HEAR What The Holy Spirit Is Saying!

11 He who has an ear, let him hear what the Spirit says to the churches.  The one who conquers will not be hurt by the second death.'

6. EXTRAORDINARY Flaming Ministers Hold Fast What They Have!

11 I am coming soon. Hold fast what you have, so that no one may seize your crown.

2 looking to Jesus, the founder and perfecter of our faith, who for the joy that was set before him endured the cross, despising the shame, and is seated at the right hand of the throne of God.

·     Will you EXTRAORDINARY Flaming Ministers – Look To Jesus?

1.    Revelation 2:7; Conquers Eat
He who has an ear, let him hear what the Spirit says to the churches. To the one who conquers I will grant to eat of the tree of life, which is in the paradise of God.'

2.     Revelation 2:11; Conquers Are Not Hurt
He who has an ear, let him hear what the Spirit says to the churches. The one who conquers will not be hurt by the second death.'

3.    Revelation 2:17; Conquers Get MSN – Manna, Stone & Name
He who has an ear, let him hear what the Spirit says to the churches. To the one who conquers I will give some of the hidden manna, and I will give him a white stone, with a new name written on the stone that no one knows except the one who receives it.'

4.    Revelation 2:26; Conquers Get Authority
The one who conquers and who keeps my works until the end, to him I will give authority over the nations,

5.     Revelation 3:5; Conquers Get Clothed
The one who conquers will be clothed thus in white garments, and I will never blot his name out of the book of life. I will confess his name before my Father and before his angels.

6.     Revelation 3:12; Conquers Get The Temple, The Name & The City
The one who conquers, I will make him a pillar in the temple of my God. Never shall he go out of it, and I will write on him the name of my God, and the name of the city of my God, the new Jerusalem, which comes down from my God out of heaven, and my own new name.

7.     Revelation 3:21; Conquers Get The Throne
The one who conquers, I will grant him to sit with me on my throne, as I also conquered and sat down with my Father on his throne.

8.     Revelation 21:7; Conquers Get Inheritance
The one who conquers will have this heritage, and I will be his God and he will be my son.

59And as they were stoning Stephen, he called out, "Lord Jesus, receive my spirit." 60And falling to his knees he cried out with a loud voice, "Lord, do not hold this sin against them." And when he had said this, he fell asleep.

·     Do you want this anointing and strength?

·     Will you be EXTRAORDINARY Flaming Ministers of JESUS CHRIST?

Back to GOD KEEP OUR LAND page